This study examined the extent to which time of day (morning, midmorning and noon) and type of activity affect children’s behavioral problems (BPs) in a Kuwaiti kindergarten. 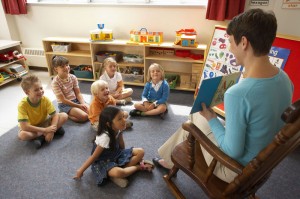 The sample consisted of 98 children identified by their teachers as having behavioral problems, based on teachers’ observation. Two instruments were used: Observational Daily Card (ODC) developed by the researcher and a List of Children’s Problems at Kindergarten (LCPK) (Yaseen, Ahmad, & Hamadah, 2000). Results show that aggression tends to be the major problem followed by extensive movement and stubbornness. Crying and chattiness were found to cause the least problems. In addition, midmorning was found to be the time most affecting the children’s behavioral problems. Results indicate that Kuwaiti boys showed significantly more aggressive behavior than did girls, while there were no significant differences between them in other behavioral problems.

The goals of the Kuwaiti Ministry of Education are based on the idea that early childhood education is a highly influential element in raising children and a key foundation for later education. The influence of kindergarten is both immediate and long-term, affecting knowledge, understanding, and attitudes towards education, religion, culture and lifestyle.

Kindergarten (KG) is the first stage of official education in Kuwait. It instructs children between 42 and 72 months old. There are two levels of learning in the KG. The first level is for newcomer children, aged between 42 and 54 months, and the second level is for the second year KG children, aged between 54 and 72 months. According to the Kuwaiti Ministry of Education, the aims of KG are to help children:

1) learn the Islamic religion and develop positive attitudes towards the values of religion and their parents;

2) establish positive attitudes towards the self;

3) be responsible, independent and able to cope successfully and peacefully;

4) develop positive attitudes towards their environment and appreciate it;

5) recognize their physical needs and take personal care of them;

6) develop healthy habits for playing, sleeping and eating, and

As children move for the first time from home to school, they need an atmosphere in which they feel free and safe (Yaseen, Ahmad, & Hamadah, 2000). Therefore, it is important for educators, administrators, researchers, and those interested in developing programs for kindergarten to be well informed and exact in their work. The focus must be not only on the type of activity itself, but also on the time of day during which the activity is presented in order to consider children’s needs. Furthermore, children’s time must be divided among different activities in order to prevent, or at least limit, unacceptable behavior occurring in school (Kyaranda, 1992).

Deyap (1986) indicates that, regardless of the specific activities implemented in a kindergarten classroom, a time balance must be maintained throughout the day addressing children’s physical, social, mental, and psychological needs. Otherwise, a number of problems may arise such as aggression, stubbornness and excessive movement. It was found that a long period of activity may give opportunity for aggression to be occurring between children. Moreover, Morad and Mahmoud (1998) stress that the main role of kindergarten is to implement activities and impart knowledge in a way that encourages children to grow and develop their abilities smoothly. Abdulfattah (1997) suggests that kindergarten programs must include a level of flexibility so that activities are spread out across different times of the day and adapted to individual differences among children. He adds that children consider activities in kindergarten as ways to participate in the school community and not just as beneficial to themselves as individuals.

This study focuses on the issue of behavioral problems (BPs) in Kuwaiti kindergartens. Many researchers and authors see BPs as any behavior that makes surrounding people (e.g., other children, parents, teachers) annoyed, angry and upset (Herbert, 1990; Ledingham, 1998; Mohammad & Morsey, 1986; Williams, 1976). In addition, such behavior causes disturbance and anger for others, and these behaviors are replicated across time and context.

According to Moosa (1999), such early BPs often result in slow progress and lead to difficulty in the teachers’ implementation of classroom activities. As such, it is important to study the various BPs exhibited in Kuwaiti school age children in relation to the KG environment, in order to discover the environmental factors most relevant and correlated to those problems. In doing this, it is important to engage the interaction between the KG curriculum and children’s behavior, which is between curriculum and context. According to Yaseen et al. (2000), the BPs relate strongly to the children’s environment. Moreover, they argue that when the KG’s environment does not have sufficient activities to satisfy and please children’s needs and desires, it will make children unhappy and BPs will be more evident.

This is a story by a male kindergarten teacher … A strange thing happened to me the other day. A few blocks from school I was meeting friends for coffee and a woman at a nearby table overheard me talking about my work. “That’s soooooo cute,” she said, waving her friend over. “He’s a kindergarten […]