This is a story by a male kindergarten teacher …

A strange thing happened to me the other day. A few blocks from school I was meeting friends for coffee and a woman at a nearby table overheard me talking about my work.

“That’s soooooo cute,” she said, waving her friend over. “He’s a kindergarten teacher!” Her friend cooed in response, “What a cute job!” 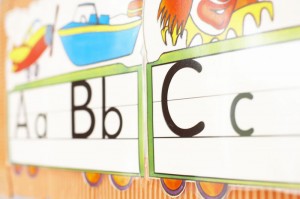 A cute job?! Now, I have nothing against the word cute. It’s a perfectly nice word and appropriate when describing toy poodles, miniature marshmallows, and boy bands. It just cloesn’t seem a fitting adjective for my chosen profession. My passion. The last eight years of my life.

Cute seems trivial. Cute squeaks when you squeeze it. Cute is somewhere over the rainbow and represents the Lollipop Guild. So, why was cute the first word that popped into their heads? There are so many other things one could say about teaching kindergarten.

Leaving the cafe, I fantasized a variety of clever comebacks that would’ve educated those two misguided women. In my alternate reality, right after they said “What a cute job,” I could have calmly responded:

“Cute? Actually, a better adjective is thrilling. You can’t sit at a desk and do it right. To keep the children engaged you’ve got to mix movement with stillness, quiet with loud, playfulness with seriousness, and chaos with calm. It’s more than just thinking on your feet. It’s thinking upside down and rolling backward while balancing a tray full of dishes. In any given week our class may experience the joy of a Langston Hughes poem, the tragedy of head lice, the angst of a rained-out recess, the slapstick of an escaped gerbil, the glory of a published story, and the miracle of a sleeping snail gently awakened by a sprinkle of water.

“Or how about cerebral? Beyond the planning, the juggling of theory and practice, the literacy, the numeracy, the social strategies, there are the big questions the students ask–large, complicated, metaphysical questions that send my head spinning and keep me up at night.

“How about the word important as author Robert Fulghum told the world in his book All I Really Need to Know I Learned in Kindergarten? When he wrote that he learned to ‘share,’ he meant it in the wider sense as it relates to social responsibility and democracy.”

Then the two women would have looked at me, amazed, apologized for their lack of awareness, promised to spread the word about how serious a job I do, and bought me a double mochacchino for my trouble and any emotional distress.

Saying all that would have been satisfying. Ultimately, though, I’d risk coming across as a self-righteous lunatic or at least “someone who looks like he missed his nap.

And honestly, there are many cute things that do go on in kindergarten. Nearly a decade into it, I’m still charmed by a face smeared with chocolate cupcake and the various pronunciations of “spaghetti.” I like Halloween parades and making gingerbread houses, too.

Edgar McIntosh is a kindergarten teacher at P.S. 41 in New York City and the coauthor of an upcoming book for Scholastic on multisensory teaching.

Getting ready to go back to school

Dealing with children who have anger issues may be challenging, and it needs thought & imagination. A child’s mind is normally not developed to deal with intense feelings of anger. They cope with these emotions in their own childlike manner which usually involves acting out or throwing a tantrum. Unaware of the specifics which cause […]

Kids nervous about the first day of kindergarten? Parents wondering what’s expected of them? Here’s a happy way out for everyone -hold a kindergarten cookout The first day of formal schooling can be a trying time for five-year-olds, their parents and the school. Fear, apprehension, anxiety, concern, tension. Not everyone feels these emotions on the […]